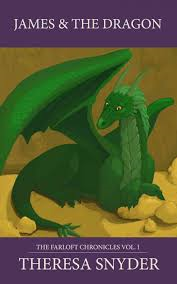 James & the Dragon is volume 1 of the Farloft Chronicles which centre on the adventures of a very old Dragon named Farloft. The Farloft Chronicles are the creation of the most excellent writer Theresa Snyder.
I first came across the book on Twitter when I was researching all things Draconic, once I had the money I decided to check it out on Amazon.co.uk. I was delighted to discover that it can be bought both on Kindle and as a physical copy.
After reading both the blurb and about the author on the Amazon website I was intrigued enough to purchase both Volume 1 and 2 of the Farloft Chronicles on Amazon Prime. I was pleased with the price and the fact I could have physical copies within a day of ordering.
I was quite excited about the books and once I received them I was not disappointed. The book is 112 pages with 104 pages of story. It very quickly introduces the reader to the main characters Farloft the Dragon, James an orphan peasant boy and the Wizard Laval.
It would be very easy at this point to give the plot away however it is enough to say that although the story involves dragons, wizards, spells, potions and curses all of which make it clear to the reader that the story they are reading is set in a world of fantasy the author also has a knack of describing the world around the characters in a way which leads the reader to imagine the story could be taking place in just about any medieval European nation.
The land itself is a typical medieval kingdom ruled over by a King and filled with hard working peasants who live of the land. They are suffering under the effects of plague and famine and it becomes clear as the book goes on that the Kingdom has seen better times. As you read on you really begin to feel for the characters even those who only exist in the background.
As the story also has enough twists and turns that just as you think you have guest what is going to happen next something else happens to take you of in a different direction.  I must confess I could not put the book down and really wanted to learn more about each of the characters and discover what had made them the way they were as if they were real people.
Overall this is a well written book which will appeal to both adults and children alike. It lacks blood and gore but does not shy away from dealing with issues such as the death of loved ones and the loneliness of been on your own. However it deals with these issues in a mature way which not only adds to the story but also helps people reading the story to see how such issues can be overcome and dealt with in real life.
As I read the book it became obvious that I was hooked I wanted to know more and when I reached the last page I was greatful that I had already bought the second book. I would recommend the Farloft Chronicles to anyone who loves Fantasy books or enjoys reading about Folklore and Fairy tales
I would also suggest that anyone who has a love of Dragons will find these books a welcome addition to their collections. If you are interested in learning more please go and visit the authors website at Website: http://www.TheresaSnyderAuthor.com you will be pleased with what you find there.
Posted by Goraxe Meridian at 04:56